All Blogs »
Browse By:

Closing the Teach For America Blogging Gap
« #79: Is the market for teachers swelling in Texas? #81: Matt Damon and the Accusation of Hypocrisy »

I’ve been reading your speech to TFA alumni in Detroit. I found the title of your speech compelling: “Fighting the Wrong Enemy”(1). Once I was able to get past the more boilerplate aspects of the speech, I dug into the core of your message. I know one of the things you and Matt Kramer want to do is be more open to criticism. I am hopeful that you see more than fire and brimstone in this post.

In your speech, you have identified the enemy as the status quo, the way things are now. Whosoever believes that our educational system is acceptable in its current form is therefore the enemy. My first question is: who supports the status quo?

I pulled up some polling data from Gallup on education related topics. Maybe the American people had become complacent with education, prioritizing other policy issues instead. Here’s a summary of what I think is relevant to the idea of support for the status quo:

The way I interpret this data is that a majority of Americans believe that the current education system is not working well and that they want the federal government to play a more active role or continue playing the same active role as it has. They believe traditional public schools are the worst option available. It doesn’t seem like the average American citizen is in favor of the status quo. So who is? Who is actively advocating that we do nothing?  You identified four examples you claim are not enemies to ending educational inequality: TFA, Bill Gates, standardized testing(2), and the charter movement. So who’s left? If I’m being uncharitable, I would interpret this as an accusation by omission. Not once did you in your speech mention teacher’s unions or experienced educators other than your sisters who get non-enemy status because they support TFA.

I’m going to assume, though, that you would never publicly denounce unions and career teachers as the cause of our educational ills. This leaves us with no human actors save that minority of American citizens who doesn’t believe there’s a problem. The status quo has no figurehead and seems to have no human agency behind it. It is this ephemeral quality that wafts through our politics and causes educational inequity. 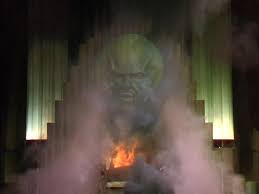 I am the great and powerful Status Quo! Pay no attention to the man behind the curtain!

TFA knows better than anyone that the cause of this status quo is political and that politics is the struggle to decide who gets what. It’s why you all are so committed to getting more alumni in politics and into elected office. Ms. Villanueva-Beard, you believe that TFA’s collective dedication and belief in its power to transform communities immunizes the organization from villainy. But few of TFA’s critics doubt that those in the TFA orbit are as committed and sincere in their work as anyone else. Certainly not I nor Gary Rubinstein nor Anthony Britt nor any other alumni critics. But, villains in politics rarely believe themselves to be villainous. The nobility of your intent will not protect you from doing harm.

I’m sure you’ve seen the news that Chicago Public Schools is laying off hundreds of teachers as TFA is placing hundreds more at the same time. It doesn’t matter how hard you work or how much you care: when you place corps members in cities like Chicago or Philadelphia where veteran teachers are losing their jobs and schools are being closed down, this is us doing harm. TFA is complicit in this damage and it is villainous.

When TFA partners with groups like the Walton Family Foundation who are explicit in their contempt for traditional public schools and for organized labor of any kind, we are partners in their agenda to destroy public schools(3).

When so much of the TFA universe is enmeshed with the charter school movement, and when charters can cream-skim and counsel out, when they serve a proportionally less disabled population, when they can afford greater per-pupil expenditure because of outside philanthropist cash, when they profiteer off tax benefit loopholes, and when TFA partners with any charter chain which commits any or all of these offenses, we are complicit in this damage.

When TFA stresses the use of high-stakes summative assessment data as the measure of its teachers’ impact, we are complicit in the accountability system which victimizes low-income communities more than any others.

You can’t play it both ways. You can’t spout progressive values out of one side of your mouth and whisper meritocratic, neoliberal ones out of the other and expect willing cooperation from your critics. You can’t band together with the powerful who have sought more power for the future-elite whom TFA heavily courts and call yourself grassroots or community-oriented.

Telling a room full of alumni that TFA is not the enemy is an insult to our reading comprehension. We know what’s going on; we know what side of the bread is getting buttered. We’re very sorry to inconvenience you all by demanding some sort of explanation and change on the part of the organization. However, I don’t think I’ve made an error in judgment. TFA’s actions run counter to my values. “Enemy” was a word you chose, and I’d care not to define you that way. But TFA is certainly no hero.

You talked about five commitments you have made coming out of your listening tour.

One is “being open to challenge and criticism.” I’m pretty darn critical and I think I’ve made some challenging statements. I want you to read me not as a scorched-earth TFA hater, but an alumni who wants to be associated with a group doing real good in the world. I think it’s possible though unlikely that TFA makes some major changes to fit more closely with what I think is “good.” I’m not a transformational leader; I’m not going to run for office or work for a powerful senator or become CEO of anything. I’m a teacher who’s a stay-at-home dad during the summer. I think the only way I can contribute to this discussion is if I encourage more disillusioned alumni to become really obnoxious, throwing dignified temper tantrums in public so that maybe you will try something else besides too-short training for too short of a teaching commitment.

Second, you said some things about data and relationships. I’m not sure what you are committing to here, to be honest. It looks like a commitment to remind yourself of something that should have been obvious from your time in the classroom. I guess Kramer is going to have trouble with that one, then.

Third, you want to be better engaged with your communities. Idea! Recruit more members of said community instead of parachuting elite college graduates from across the country year after year.

Fourth, you warned against growth for growth’s sake. Then, stop growing. Your corps members are spread a mile wide and an inch deep and you are wading into regions that don’t want you (Seattle, Minnesota).

Finally, we need to invest more in helping our corps members be even more effective.  Too often corps members say they do not get the support they need to ensure they can deliver on the well rounded world class education our students deserve and they want to provide.  We need to do better.

We’ve been saying this for a while. Make the pre-service training longer and more meaningful. It’s not a difficult solution, just a challenge to implement when you’re trying to sustain growth and stick by this ludicrously out of date idea from some undergrad’s thesis 25 years ago.

I’ll wrap this up on a conciliatory note: I have personally had a pretty good TFA experience! I have had great relationships with people in the regional office including the director and my MTLD. They have been very open to my criticism and have validated a lot of what I have said in person and on this blog. Nearly everyone tells me how awesome I am which is weird and feels wrong, but is nice anyway. The corps members I have met are gracious and hard-working and immensely talented and open-minded. I am dismayed that we encourage so many of them to pursue other fields(4) because it is quite clear that many are born teachers. I learned a couple of things in Institute that have been helpful in organizing a year-at-a-glance and units as I’m doing now. I’m anti-TFA insofar as I don’t support what you all do right now. But I’m not against what TFA has the potential to become.

I just want you all to do more than listen now. When you listen to Chicago teachers rage at your complicity in their colleagues’ firing, I want you to say something like, “Mea culpa. We’re giving back all that money we charged you(5). Let’s make sure those teachers have jobs.” And I want you to shutter that regional office until there are actual teaching vacancies(6). That would be incredibly bold and a show of faith with the educator community at-large. Show the kind of leadership that is truly heroic that will actually be of value to the communities you serve.

(1) Almost to suggest that TFA is an enemy, just not the right one to fight.

(2) I presume Pearson and their ilk are included, as are any public figures who tout the necessity of high-stakes testing to ensure quality education.

(3) Your facile invocation of the late Martin Luther King, Jr. is all the more risible knowing that he was killed while advocating for striking sanitation workers’ rights in Memphis.

(4) Especially law and business, YUCK. That’s like telling Mariah Carey she should be an auctioneer.

(5) Seriously, what is this finder’s fee business? “Please give us five grand because we found you a Dartmouth grad who wants to be a physician.” Give that money back, that’s stealing.

(6) I am suffering under no delusions that you will do anything like this anytime soon.

Image taking 10mg Cialis, (Tadalafil) together with great success Once suffered from big troubles rice, to the stage that we was considering surgery Several drugs include bad side effects similar to losing sexdrive, in which generating permanent harm When i Buy Cialis Without Prescription first discovered rice via the World wide web, some time before that acquired authorized by the FDA, described the idea to my own Urologist, who was simply the teacher for a school who seem to authorized the idea instantly Treatment will not be addressing the idea plus the drugstore seemed to be trying to demand $286 for just a erectile dysfunction cures 30 days offer This sovaldi cost particular kept us the only real replacement for obtain the online pharmacy on the sovaldi cost Internet when I am 12 months provide during a period Cialis Online maintaining the idea in the freezer for you to retain its capability Great results for my personal a prostate related along with Natural Remedies For Ed my personal bedroom antics.

Teach For Us thanks our national sponsor for its generous support